To share your memory on the wall of John Izumi, sign in using one of the following options:

Print
John Stephen Haruo Izumi was born on October 19, 1957 in Honolulu, Hawaii. He was called to heaven on February 08, 2020 at the age of 62 and was surrounded by family in his last moments.

John was one of four children born to Michael & ... Read More
John Stephen Haruo Izumi was born on October 19, 1957 in Honolulu, Hawaii. He was called to heaven on February 08, 2020 at the age of 62 and was surrounded by family in his last moments.

John was one of four children born to Michael & Nancy Izumi. He grew up in Kailua with siblings Marian (Marty), David, and Mark, and is an alumni of Kailua High School. In 1976 he enlisted in the Air Force and served six years as a heavy equipment mechanic. In the Air Force, John served in the Vietnam War and practiced the arts of hula and slack key guitar as a member of the Hawaiian Club. After discharge from the Air Force, he elected to serve two more years in the Army Reserves.

John was a jack-of-all-trades and he had several different jobs that utilized his talents of dexterity and creativity, including the creation of his own contracting company entitled Creative Technologies. For a short time, he also worked as a ramp agent for Mid-Pacific airlines where he met his wife, Cathy, who was working as a flight attendant. John and Cathy married on January 25, 1987, and he played a large supporting role in Cathy’s dance studio as the production manager and was a significant father-figure to many of the dancers.

John was also a faithful Christian with a very big heart. He was an active member of Hope Chapel, New Hope and the Chinatown Ministry (PS150). He regularly volunteered his time and energy to help feed the many homeless and would offer companionship and comfort as he helped to spread the word of god to those in need.

Above all, John was a beloved son, brother, husband, father, and grandfather. He was passionate, talented, strong, and a true family man. He left behind a remarkable legacy of eight children and twelve grandchildren whom he was so incredibly proud of. John has impacted many lives in his time on earth and he will be greatly missed by all.
Read Less

To send flowers to the family or plant a tree in memory of John Stephen Haruo Izumi, please visit our Heartfelt Sympathies Store.

Receive notifications about information and event scheduling for John

You will receive any future notification messages.
Print

Provide comfort for the family with a meaningful gesture of sympathy.

Show you care by sending Flowers

We encourage you to share your most beloved memories of John here, so that the family and other loved ones can always see it. You can upload cherished photographs, or share your favorite stories, and can even comment on those shared by others.

Posted Feb 29, 2020 at 12:59am
Even though we weren’t born to the same parents we know God blessed us to have you as our Brother ♥️ Thank You for being such an awesome example of God to our sons and for all the Love & Laughter...until we meet again in Heaven there will be an empty space in our hearts. We love you! Jeff & Tams
Comment Share
Share via: 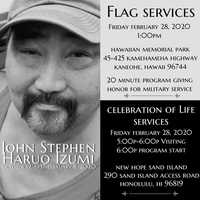 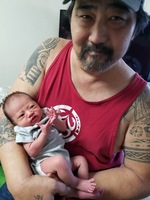