To share your memory on the wall of Robert Via, sign in using one of the following options:

Print
Robert Abraham Via, Jr., ‘Uncle Bob’, passed away on June 3, 2020. He was born on February 16, 1927 to Robert and Muriel Via in Honolulu, HI, and raised by his father and stepmother, Mary Kaawaloa Via.

While growing up in Kailua, H... Read More
Robert Abraham Via, Jr., ‘Uncle Bob’, passed away on June 3, 2020. He was born on February 16, 1927 to Robert and Muriel Via in Honolulu, HI, and raised by his father and stepmother, Mary Kaawaloa Via.

While growing up in Kailua, HI, he acquired his lifelong passion for swimming, surfing, fishing, and volleyball. After graduating from the Kamehameha Schools in 1945, he went on to study at the University of Hawaii for 2 years and then joined the U.S. Army. Bob was a decorated veteran who was honored with 2 Purple Hearts and 3 Bronze Stars while serving in the Korean War as an Army Ranger. He retired from the military in 1972 and began his second career as a Swimming Pool Manager and Swimming and Water Safety Instructor at the Kane’ohe District Park Swimming Pool. Over the next 20 years, Uncle Bob taught thousands of Hawaii’s keiki, adults, seniors, and students with special needs to swim, lifeguard, and enjoy the water. He retired from the Honolulu City and County in 1992, but continued to volunteer with the Red Cross teaching Water Safety and Lifeguard Certification classes. Uncle Bob was honored as the 2012 Red Cross O’ahu Volunteer of the Year and was inducted into the Hawaii Swimming Hall of Fame in 2018. Besides water sports, he enjoyed golfing, playing tennis, hunting, fishing, and always having fun with his ‘tennis gang,’ his ‘Red Cross and Lifeguard Ohana,’ his Morris and Grace Shin Ohana, and numerous close and dear friends and neighbors.

He is survived by his children, Robin Tibaduiza of Honolulu, HI, Shelly Assiff of Reno, NV, Wayne Martinson of Union City, CA, and Wanda Martinson Castro of Reno, NV, 7 grandchildren and 7 great grandchildren. His everlasting kindness with others, sense of humor, and encouraging and positive attitude will live on in the hearts of ALL who enjoyed him.

A Celebration of Life will be announced at a later time.
Read Less

You will receive any future notification messages.
No funeral details available.

Posted Jun 26, 2020 at 07:27am
Rest in Peace, Uncle Bob. Like most lifeguards, I can instantly remember the sheer energy he brought to every Lifeguard Class. What an inspiration. My condolences to his ohana. God Speed!
Comment Share
Share via: 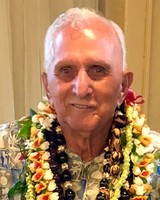 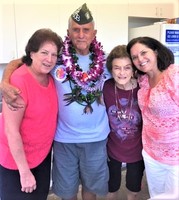 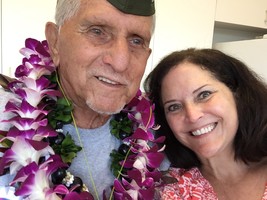